A story of Guppies and Belugas

A story of Guppies and Belugas 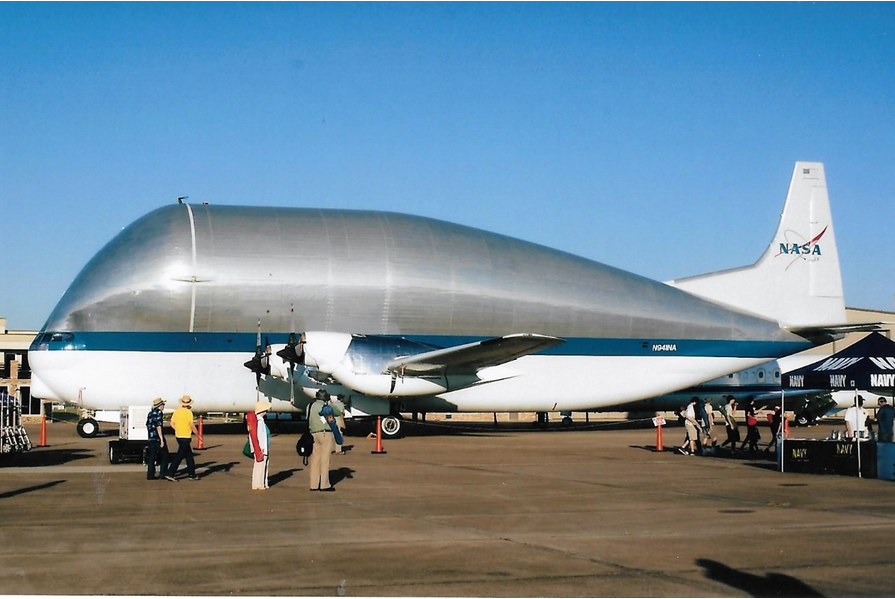 The last Aero Spacelines Super Guppy SGT, originally built for Airbus, is now the sole flying example of this remarkable breed. Flown by NASA. Seen here at the Wings over Houston air show in 2011 it is still in service today.  Photo Keith Bradshaw

Back in the early 1960s John Conroy set up a company called Aero Spacelines to exploit a gap in the aviation market for an outsize transport plane. His target customer was NASA, who at that time were shipping rocket parts around its facilities in the USA by barge and road. This was a very expensive undertaking and John Conroy thought he had the answer to a cheaper alternative; air transportation. With many of the major airlines re-equipping with jets, their old piston powered fleets were being sold for a pittance or indeed just scrapped. It was to the Pan Am fleet of redundant Boeing Stratocruisers that Mr Conroy looked as the basis for his new plane and he began to acquire a number of these redundant old airliners. The US military also operated a version of the Stratocruiser under the title the C-97 or the tanker version the KC-97.

John Conroy’s plan was to adapt these airliners to be able to carry complete sections of the Titan rocket that was presently being planned by NASA as part of the Gemini project. His re-design of the Stratocruiser took the original wings, engine and tail and mated them to a much modified fuselage which basically had its upper part massively expanded to make the cargo hold. To enable the payload to be slotted into the now huge area required the entire tail section of the aeroplane to be removed for loading/unloading. He called this new aeroplane the Pregnant Guppy and the aeroplane first flew in 1962. Just one example was built and it flew with NASA until it was replaced by the next version of this outsize airlifter, with the plane eventually being scrapped in 1979.

Such was the success of this form of transport, despite the time it took to remove and refit the tail, it was obvious that NASA needed more than one aeroplane. Learning from the earlier design Aero Spacelines came up with the Super Guppy which would be longer and wider, powered by four turboprop engines for greater power. To address the loading problem of the Pregnant Guppy the whole nose section was hinged to open sideways for loading. As it turned out, only one of this type would be built. Being based on the Stratocruiser fuselage, the width of the floor could not be enlarged. NASA operated this aeroplane and two more derivatives named the Super Guppy SGT for Airbus to carry aircraft parts around their sites in Europe. The major difference between the two types was that the later SGT had a brand new fuselage built with a wider floor which was needed for the Airbus components. So happy was the European manufacturer that it later obtained the rights to the design and built two more bringing its fleet up to four Super Guppy SGTs. When they were retired three went to museums including Bruntingthorpe in the UK. The fourth one crossed the Atlantic and is now the sole example of the type still flying with NASA continuing to use it for outsize cargo flights.

The Super Guppy was the only variant that could carry a complete booster unit for the mighty Saturn 5 that was used for the NASA moon flights with the Apollo programme. The Airbus aircraft had become regular visitors to the UK picking up wings from Chester and other components from the Airbus facility at Bristol. The first of these Super Guppy SGT aircraft arrived with Airbus in the early 1970s and with a floor now 13 feet wide, as compared with the Super Guppy 8 feet 9 inches, plus a 111 foot-long cargo bay they were well suited for Airbus’s requirements. The two French built examples joined the fleet in 1982 and 1983 and flew on with the company until 1995 when they were replaced by the Airbus Beluga.

Back over in the US, Aero Spacelines were looking for other opportunities to use their expertise in these outsize conversions and in 1967 they came up with the Mini Guppy. A much less radical conversion but still based on the Stratocruiser with a new wide floor fuselage. Two examples were built, one piston-powered the other turboprop. The turboprop example had a very short life of just two months when it was destroyed in a crash during flight testing in May 1970. The surviving piston- powered aircraft was operated by Aero Spacelines on contract to NASA before being sold on to Aero Union, an aerial fire fighting outfit who used it to carry heavy equipment. After service with them in 1988 it went to Erickson Skycrane with whom it finished its active service in 1995. It now resides in their museum. The Mini Guppy had yet another way of accessing the freight bay - this time with a hinged tail section.

John Conroy had one last throw of the dice when he realised that with all Lockheed L1011 Tristars being Rolls Royce RB211 powered there would be a need for a regular run of engines from Belfast UK to Palmdale California. Thus in 1969 he launched the Conroy CL-44 Skymonster. Using a Canadair CL-44 freighter he added an upper fuselage just like his earlier Mini Guppy. The CL-44 already boasted a swing tail for cargo hold access so this made the conversion easier. In fact the whole conversion was carried out outside under covered scaffolding at Santa Barbara airport California. With the new large freight bay the Skymonster could carry three RB211s in its hold. The aeroplane flew on with several operators until 1999 when it arrived at Hurn airport Bournemouth. It is still there today amid constant rumours that it will be flying again or scrapped due to heavy corrosion. Who knows what the outcome will be.

With large piston-engine and turboprop freight aircraft becoming a thing of the past, one thing that hasn’t altered is the need to transport outsize items around the world. As in the past, there are very few aircraft capable of fulfilling that role. The Russians have their mighty six-engine jet the Antonov An225 which was originally built to carry the Russian Space Shuttle on its back. When this project was cancelled the aeroplane was used for outsize cargo flights. Its fuselage is 21 feet wide and 142 feet long, in fact the Wright brothers could have conducted their first flight INSIDE the Antonov!  The An225 is the heaviest aeroplane ever built and fully loaded weighs in at 710 tons with a max load of 245 tons internally. Only one example of the Antonov has been completed and is used around the world for carrying very heavy or very long items of freight. This is a very niche market and companies like Boeing and Airbus have a requirement to fly regular flights carrying components around their factories for their airliners. Since the mighty Antonov is not suitable for their needs they had to look elsewhere for a suitable type.

Airbus had been looking for a replacement for its Super Guppy aircraft and in 1995 it converted one of its A300 freighters into the first Beluga transport. The original A300 was converted by adding a large bubble to the fuselage in a similar style to the Guppy. This huge plane could load a complete Airbus wing through the lift-up front fuselage above the cockpit. The design requirement was for the plane to be able to lift the heaviest sub-assembly being produced for Airbus which at the time was the A340 wing made in the UK at Broughton. The Beluga’s freight bay is 24 feet wide, 124 feet in length and it can carry a payload of 51 tons. Five Belugas were eventually constructed with four flying the 30-plus flights a week required by Airbus and the fifth being available for worldwide charters. Ironically one of the early charter customers was Airbus’s arch rival Boeing. However as production of the single aisle Airbus has ramped up over recent years all five Belugas now fly mostly for Airbus, they are planned to remain in service until 2022.

In 2013 Airbus concluded that the original five Belugas would not be able to cope with the increased rate of production of the Airbus range of airlines. Airbus looked at other aircraft to supplement the fleet, none were deemed suitable so the decision was taken to once again build their own. This time based on the larger A330 the Beluga XL as it was to be known would have a larger 207 feet long, 29 feet wide freight bay, be able to carry more weight, up to 58 tons and could also fly more than twice the distance of the original aircraft having a range of 2300 nautical miles. This larger payload capability allowed the Beluga XL to carry two A350 wings as opposed to just one in the original Beluga. Each aircraft of the proposed fleet of five would take a year to build and the plan called for the new planes to initially supplement the older Beluga before replacing them in 2022. The first flight of the new XL took place in 2018 and the first example finally entered service in January 2020.

So what was going on across the Atlantic at Boeing who had in the past had to charter a Beluga as they had no outsize transport of their own? For many years all Boeing airliner assembly had taken place in the Seattle area and components such as Boeing 737 fuselage sections made in Kansas were shipped to the northwest US by railway. The launch of the Dreamliner changed all that. Such were the number of orders for this all-composite fuel-efficient airliner that Boeing opened another factory at Charleston in South Carolina. This presented them with the same problem as Airbus, how to ship all the parts from contractors around the world to the assembly plants. Their answer was to buy four secondhand Boeing 747-400s, Three from China and one from Malaysia Airlines and have them converted into outsize freighters named the Dreamlifter by the now standard approach of enlarging the upper fuselage. Access to the cargo bay was by a swing tail just like the Mini Guppy and CL-44 of old. The first Dreamlifter flew from the factory in Taipei in 2006, just two years later three were in service. Delivery of Dreamliner wings from Japan used to take 30 days before the Dreamlifter started work, this delivery time is now reduced to just 8 hours.

So there we have it, a group of unique aeroplanes that would win no prizes in the beauty stakes but a group that can lift loads and weights no others can.

‘til the next time Keith